With an appeal to end the farmers’ movement, PM Narendra Modi announced the repeal of agricultural laws in the winter session of Parliament. The farmers’ agitation, which started after the introduction of these agricultural laws, had created a fierce atmosphere against the BJP in Punjab, western Uttar Pradesh and Haryana. 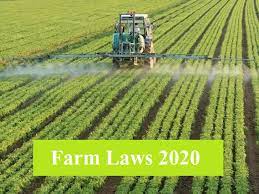 Repeal of Farm Laws With an appeal to end the farmers’ movement on the borders of Delhi for the past one year, PM Modi announced the repeal of agricultural laws in the winter session of Parliament. This is the second time after Narendra Modi came to power in 2014, when the central government has withdrawn a law after passing it. The peasant movement that started after the introduction of these agricultural laws had created a fierce atmosphere against the BJP in Punjab, western Uttar Pradesh and Haryana.And, in the assembly elections of 5 states including Uttar Pradesh, Punjab, to be held in the first quarter of next year, due to agricultural laws, the BJP was expected to suffer. Prime Minister Narendra Modi’s decision to repeal agricultural laws on the occasion of Guru Parv is being considered a major masterstroke ahead of the upcoming assembly elections. In this situation, the question is bound to arise whether the repeal of the agriculture law will change the political equation in the electoral states?

With whom will the BJP tie up in Punjab?

There was such an atmosphere against the BJP in Punjab that it was because of the agricultural laws that the Shiromani Akali Dal had ended the decades-old alliance with the BJP-led NDA. However, even after breaking the alliance, the Congress had left no stone unturned to create an atmosphere against the Akali Dal. But the Congress, which was supporting the farmers’ movement in Punjab, was on the back foot due to its internal strife.Navjot Singh Sidhu had opened a front against Captain Amarinder Singh. Due to which Amarinder Singh had to resign from the post of Chief Minister of Punjab. After leaving the Congress, Captain Amarinder Singh decided to form a new party. At the same time, now after the return of agricultural laws, the equations created so far are seen changing.

In view of the assembly elections in Punjab, the Akali Dal had announced an alliance with BSP supremo Mayawati. But, even after all these efforts, the Akali Dal did not seem to be particularly effective in the state. At the same time, the Aam Aadmi Party seemed to be getting the benefit of the discord in the Congress. Amidst all this, former senior Congress leader Captain Amarinder Singh had taken a big initiative to improve his political relations with the BJP.Amarinder Singh had declared that he was ready to forge an alliance if the BJP took any decision in the interest of farmers. Not only this, while describing the BJP as a nationalist party, the Captain had even said that there was no opposition to the BJP in Punjab before the farmers’ movement.

Well, the masterstroke that Congress played by making Charanjit Singh Channi the first Dalit CM in Punjab, is being questioned by many Congress leaders of Punjab including Navjot Singh Sidhu. After the end of the farmers’ movement, Navjot Singh Sidhu will now have the only option left to open a front against the Congress government’s CM Charanjit Singh Channi. Which seems to be hurting the Congress only.It is possible that with the end of the farmers’ movement, the Akali Dal may try to forge an alliance with the BJP again. But, because of this, his alliance with BSP supremo Mayawati will be in danger. And, the Akali Dal would like to see the impact of the repeal of agricultural laws before taking any such decision.

What will be the strategy of the opposition in western Uttar Pradesh now?

Following the agenda of Hindutva and nationalism, the way the BJP had kept its hold on western Uttar Pradesh strong in all the previous elections. With the abolition of agricultural laws, the possibilities of his return have increased tremendously. One important thing is that after the repeal of agricultural laws, there will be a competition among all the opposition parties including RLD, SP, Congress, BSP to take credit for this decision.Which will automatically lead to spoil the equations created somewhere. Parties like SP, RLD, which are still looking strong, may be bent on harming each other in the process of proving themselves to be the biggest benefactor of the farmers. At the same time, for the BJP, such conditions can be called the most favorable for the UP elections. Because, the more the votes are scattered, the more will be the benefit of the BJP.

There will be a difference in some seats in Uttarakhand

Assembly elections are to be held in Uttarakhand along with Uttar Pradesh. The impact of the farmers’ movement was being considered in some seats in Uttarakhand. There was a possibility of major upheaval in these assembly seats adjoining western Uttar Pradesh. In this situation, the equation is likely to change with the withdrawal of the agriculture law by the central government. Coordination with farmer organizations can benefit BJP

THE LANDING OF ‘CHUNAVI SIKANDAR’ FROM THE HERCULA PLANE ON THE PURVANCHAL EXPRESSWAY..

There was a dispute between UP-UK on these issues for 21 years, CM Yogi and Dhami settled in minutes

Kanpur Metro – A good infrastructure adds to the happiness of city