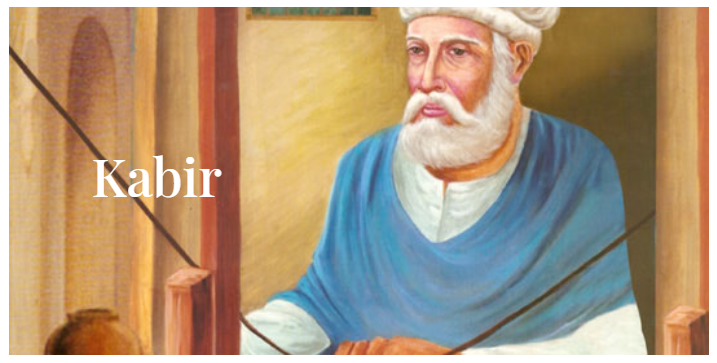 Kabir is a name synonymous with spirituality and poetry.

Not much is known about the circumstances around the birth of Kabir. The most reasonable guess places his birth around 1440. He is unusual in that he is spiritually significant to Hindus, Sikhs, and Muslims alike.

Kabir was raised among a Muslim community of weavers. He was never formally educated and was almost completely illiterate. According to legend, the only word that he ever learned how to write was “Rama”.

The basic religious principles he espouses are simple. According to Kabir, all life is an interplay of two spiritual principles. One is the personal soul (Jivatma) and the other is God (Paramatma). It is Kabir’s view that salvation is the process of bringing into union these two divine principles.

The social and practical manifestation of Kabir’s philosophy represents a synthesis of Hindu, and Muslim concepts. From Hinduism he accepts the concept of reincarnation and the law of Karma. From Islam he takes the affirmation of the single god and the rejection of caste system and idolatry. Not only has Kabir influenced Muslims and Hindus but he is one of the major inspirations behind Sikhism as well.

Kabir has written much poetry and song. His lyrics are characterised by a free use of the vernacular, and is unfettered by the grammatical bonds of his day. It is this quality which has made his philosophy accessible to generations of Indians.